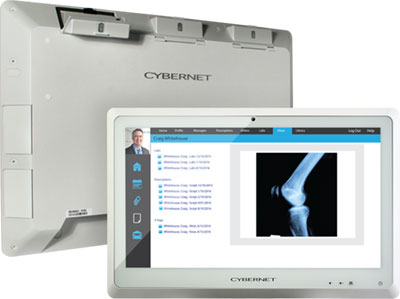 Established in 1993 as a not for profit corporation, Baker County Medical Services (BCMS) has continued to place importance not only on serving those who can’t afford care, but those who work under their roof as well. By continuing to invest in the latest radiological and diagnostic tech as well as new staff workflows, the team prides itself on providing care and a work environment that rivals, if not eclipses, those of a larger urban hospital.

Baker County’s workstation on wheels solution consisted of three key components: a battery powered Capsa Healthcare cart, a monitor, and an HP thin client computer. And while their thin client computer provided no issues to their workflow, unfortunately the same couldn’t be said about the other two components. Being battery powered, Baker County’s carts were very bulky and hard to wheel around the facility. Not only that, the team reported that nearly every two to three months they would suffer a breakdown and require a replacement power source that would cost them easily over a thousand dollars each time. Their monitors were also quite outdated, resulting in similar breakdowns and impacts on their nursing team’s workflow.

Noticing the repeated grievances of their nursing and physician teams, Baker County began ideating a new solution for their portable workstation needs. First and foremost, a battery powered cart was out of the question. They were simply too clunky, difficult to move, and costly to maintain. With this in mind, the team knew they needed a solution that would eliminate the need for a battery powered cart. With a move to a non-powered cart decided, the team would need to think outside of the box to find a computer and monitor solution with a portable power source.

When creating a list of prospective manufacturers, the IT team decided to look at Cybernet Manufacturing, who had provided a few computers for kiosks they had at their facility. A quick Google search later, and Baker County found the CyberMed NB22 Medical Computer, which is powered by 3 hot swap batteries

While the team was originally only looking for a monitor, they were pleasantly surprised to see that the CyberMed NB22 was an all-in-one PC solution. Not only was the NB22 powered by three hot-swap batteries, eliminating the need for a powered cart, but it also had a better resolution than their current monitors and eliminated the need for a thin client PC. After speaking to a representative from Cybernet, Baker County quickly realized that the NB22 all-in-one medical computer improved upon all three components of their portable workstation solution. It provided them with a more modern and reliable display with a less than 2% failure rate, it allowed them to use a lightweight and less bulky cart, and it cut the need for an external thin client computer.

Further sweetening the deal, the NB22 computers were also UL60601-1 certified, making it safe for near patient use and IP65 certified, making it near impervious to liquid ingress and capable of withstanding liquid sanitation products without compromising performance. With all of this in mind, Baker County was happy to move forward with Cybernet’s offering.

A month after deploying their new workstations, Baker County is happy to report no issues. Far from it, their nursing team continues to report positive feedback about their new workflows. The NB22 units have continued to last almost 12 hours on a single charge, meaning nurses can go an entire shift without needing to worry about battery life once. The team was also able to make good on their promise of providing a lighter weight cart solution and both nurses and physicians have reported their new workstations are much easier to wheel around the facility. The Baker County IT team was also pleasantly surprised to hear the nursing staff enjoyed the NB22’s touchscreen functionality which was an unplanned for, but happily welcomed, benefit.

Baker County is beyond pleased with how their new Cybernet units have been able to optimize their care and lighten the load, both literally and figuratively, for their nurses and physicians. Seeing how effective the units have been, they are also considering investing in backup batteries and charging stations in the future to eliminate the need of plugging their workstation on wheels to a wall altogether.

The nurses actually love the computers a lot. The way we have them set up, they’re lasting almost 12 hours which is basically a whole shift for a lot of them. The fact that your computers are all-in-one also lets our nurses use Ergotron carts that they tell me are much lighter and smoother to wheel around.